The RAF F2 sidecar team called into Artic’s HQ on their way to the first round of the championship at Brands Hatch to meet with company owner Vince McAnallen and to officially launch our partnership with the RAF Motorsports Association. Rob and Mark demonstrated the new sidecar to Vince and the Artic board and explained how some of the sponsorship has already been invested. They also came with news of further events later in the year around the international air tattoo, the largest military air show in the world, and the Formula 1 grand prix at Silverstone where the team will be part of the RAFMSA displays.

After lunch, the team headed off to Brands Hatch for the first-round weekend and embarked on a day of testing with the new bike on track for the first time. A challenging first session saw the Team complete only 3 laps before a wayward cable burnt through and cut power to the engine.  Fortunately the repair was straight forward and the Team were out on track for the second session two hours later with a trouble free run ending in them posting the fastest lap time of the day

The RAF team of Rob Atkinson and Mark Middleton are based at Brize Norton airbase in Oxfordshire, famous the world over, and used as a set in the latest Bond film. Away from the excitement of Hollywood, the team get their adrenaline fix on the racetracks of the UK through a six-round championship taking in Brands Hatch and Donnington Park before heading to Wales and Scotland later in the season. Further supporting race meetings are planned on the Isle of Man and Brands Hatch (again) so our staff and customers will have ample opportunity to see the team up close and in action.

Our sponsorship has enabled the team to significantly enhance the bikes preparation for the new season with a new engine, new ignition system and major chassis alterations. Final preparations are well advanced to ready the bike for the first round of the championship at Brands Hatch circuit in Kent on 23rd & 24th April where the joint RAF and Artic liveried bike will be raced in anger for the first time with two points scoring races over the weekend. We are looking forward to joining and supporting the team on their Road to the TT. 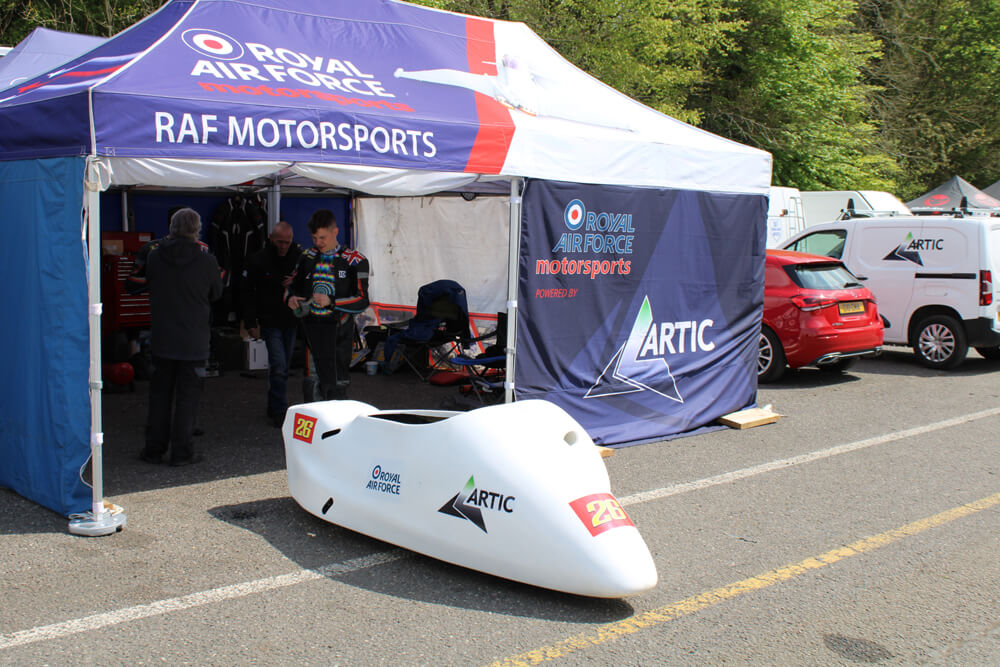