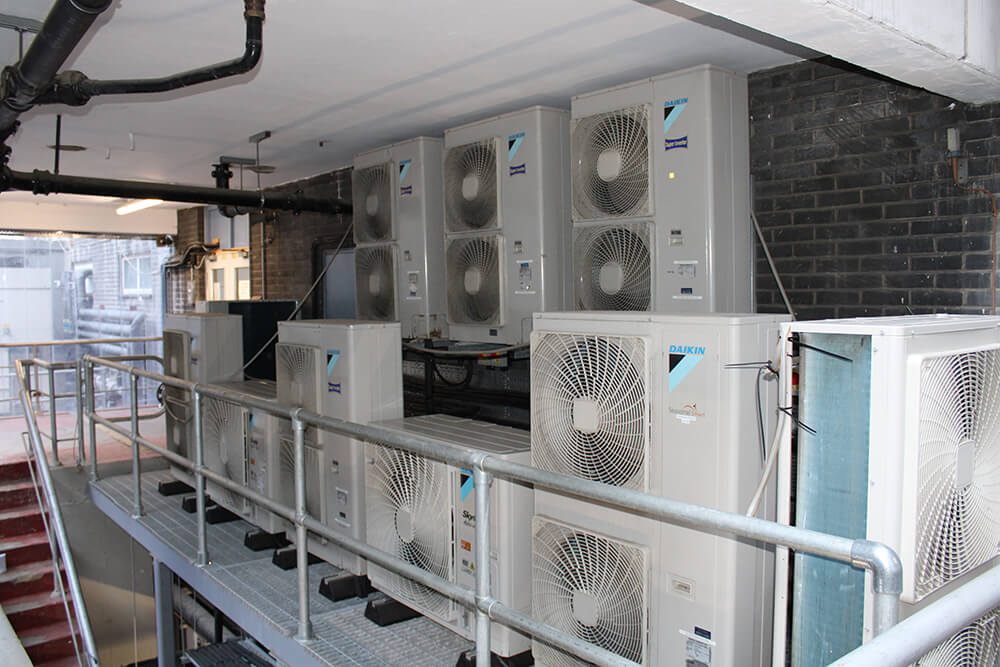 Artic has supported University College London (UCL) with their MEP projects for several years. When they were experiencing issues with their existing air conditioning systems for several of their equipment rooms, Artic helped resolve the problem. By moving their AC condenser units from an underground car park to a purpose-built gantry, overheating problems could be avoided whilst also reducing running costs.

After visiting the site, Artic quickly identified that the twelve AC condenser units for the rooms experiencing issues were located in Torrington Place Car Park. The car park had inadequate ventilation to dissipate the heat generated by the condensers, which was causing high head pressures and frequent compressor failures as the units were being operated outside of their design parameters.

In addition, this was also causing nuisance calls to the London Fire Brigade as the ambient temperature in the car park could often reach 60 degrees, which was setting off UCL’s fire alarms. Furthermore, with these systems trying to run in such a high ambient temperature, the running costs were much higher than necessary.

Artic proposed that the twelve condenser units be moved to the back of the building where the AC systems were installed, where they would be in an open-air location. This would enable the units to operate more efficiently and reliably as the heat generated would be effectively dissipated.

As there were no other suitable locations for the condenser units, Artic proposed a purpose-built steel gantry to house the units. This was located between the two rear exit doors of the building in an outdoor courtyard area. Moving the condenser units required that the pipe and cable services be moved from the current location in the car park to the new gantry.

However, to avoid causing any failures from the heat loads in the equipment rooms the AC units served, each condenser had to be moved individually and fully commissioned before another condenser could be moved. Where a room was served by four AC systems, there was a possibility of moving two condenser units at the same time. This would only be possible if the remaining two AC systems were able to cope with the cooling load, which had to be assessed before the works began. In the end, the condensers were moved in pairs where possible, which minimised disruption.

After the condensers were moved, the pipe runs were measured to ensure that the units would still operate effectively. As the pipe runs were longer than the original installation, Artic identified that additional refrigerant was necessary for the AC units to run optimally and arranged for this to be carried out. The system was pressure tested, evacuated, and charged with the correct quantity of refrigerant gas. In addition, all of the installation works were tested for correct operation, and UCL staff were familiarised with the functions of the unit controller.

Moving the condenser units from an enclosed car park to an open-air location has assisted with the reliability of the AC systems, significantly reducing overheating issues. Furthermore, it has also helped reduce UCL’s carbon footprint, as the units are now operating more efficiently.

Trust Artic for all your Higher Education facilities management needs. Our team of experts provides a range of services, including HVAC maintenance and energy-saving solutions, to ensure safety, compliance, comfort and efficiency for students, staff and visitors. Contact us today for a tailored solution that meets your specific needs and delivers the highest level of service and support.