Artic have recently concluded the contract to replace a key chiller at the UK Head Quarters of the world’s largest banking groups in the heart of the City of London. Artic are already the Contracted Hard FM Partner to ICBC Standard Bank, providing Planned Preventative Maintenance and Reactive Works programmes to the entire operation covering Mechanical & Electrical assets, Fire systems, Access systems, Drainage and Building Fabric Maintenance. Artic are also the main supplier for all Air Conditioning Project works at the UK HQ building and their two remote disaster recovery sites.

As one of London’s largest Banks working all the major financial markets across the world, the offices are truly a 24/7 operation where support from the buildings service assets is key to maintaining their business continuity efficiently and without interruption.

The bank has a suite of chillers providing cooling to the building’s areas including the main computer rooms, UPS rooms, HV Transformer and switch rooms. These areas are, of course subject to a 24/7 need for cooling which is alternately split between the main “house” chillers and a backup chiller for night time low occupation conditions and to provide additional resilience in the event of a building cooling failure.

When our residential maintenance teams began to identify trends indicating increasing problems with the existing chiller which was coming to the end of its CIBSE guidance expected life span, they made representation to the bank suggesting replacing the chiller with new. The Artic Projects team were brought in and discussion commenced with the bank’s representatives as to how this could be achieved and what factors and features were of most importance to them. As a result of these discussions, the bank set Artic very challenging targets to improve overall energy efficiency, “future-proof” the solution, and to minimise the down time to the bank’s operation to just one weekend period. ISO requirements with relevant industry guidelines and standards constantly striving to have minimum impact on our environment meant that finding this balance was imperative to the successful replacement.

After consideration of several options with the bank, a Turbocor chiller rated at 371kW cooling option, whilst the most expensive on capital cost, it was selected as the most efficient and cost-saving option when considered in the medium to long term. It would be expected to pay back the extra money in energy savings easily over its lifecycle (10-15 years judging from previous experience and with CIBSE guidelines in mind). The energy savings per annum when compared to more traditional chiller technologies, are immense and the pay back on our installation price differential is estimated at 1-2 years. After this initial payback period, the renowned exceptional energy efficiency of Turbocor chillers will significantly reduce the bank’s energy use and decrease energy bills whilst maintaining the bank’s central core services in excellent operational environments.

The chosen chiller utilises R134a refrigerant but with Turbocor compressors already available with HFO refrigerant, the opportunity to modify existing chillers to keep abreast of gas legislation is expected in the future.

With the bank’s instructions in hand, the Artic Project team set about the complex task of planning road closures, arranging permits and cranage and pre-scheduling every detailed process required to de-commission the existing chiller with is associated pumps and pressurisation unit in order to fully complete the replacement installation from start to finish over just one weekend. Enabling works were required to remove two spine beams that spanned above the existing chiller on the roof of the building and a specialist BMS company was appointed to re-configure the controls scenarios in order to continue to cover the affected areas over the weekend via the main house chillers.

Full decommissioning of the existing took place on a Saturday and as day broke on the Sunday, the road outside the HQ building was closed off for the specialist cranage company to set up, lift the equipment off the roof and lift the new into position. Artic engineers worked into the night to connect the new chiller mechanically and electrically and associated parts into the cooling infrastructure. The unit was tested and commissioned immediately, ensuring that the new chiller was up and running by the Monday morning for a smooth and fast turnaround with no disruption to the bank’s operations or occupants. To maximise the efficiency of the new system and ensure minimum disruption to the daily operation, rescheduling the BMS control of the 24-hour cooling to the MER and UPS rooms was the key final component. 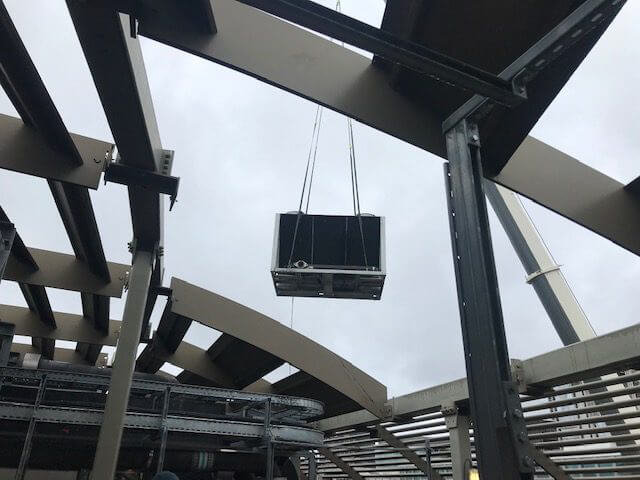